For those new around here, “Weekly Readings” is when your lit. rat reviews a round of picture books that deserve more attention than they currently have.

From the newest releases to hidden gems from eras past.

While T.A.A. focuses mostly on animal stories, we give humans their due, every now and again.   Now that #BarkWeek’s behind us, this week we’re giving you cat lovers some love!

From a tiger who rebel against tea parties.

A pirate cat who’s not afraid to get wet on the seven seas.

Finally, another gem from our growing archives pays tribute to the Jersey Shore of days gone by…from the POV of a stray cat and a carousel- 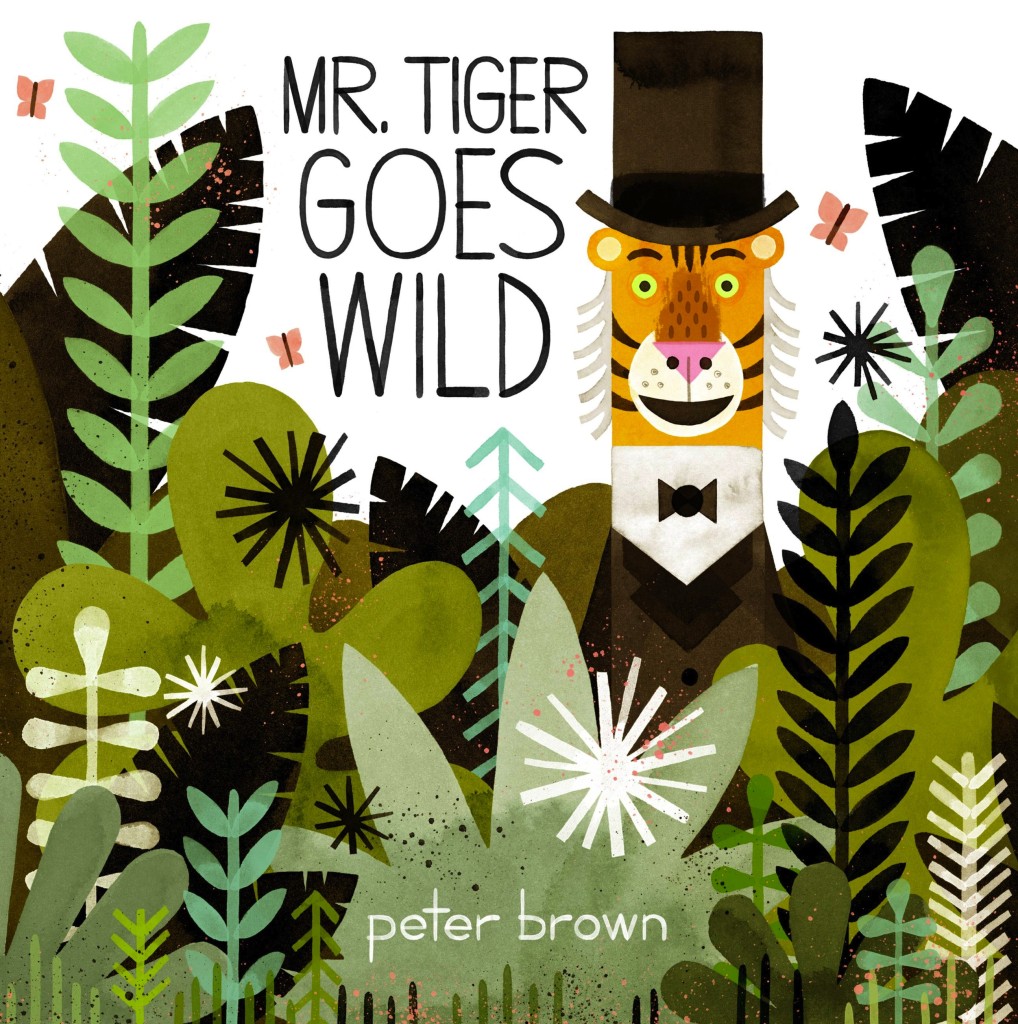 I feel bad I didn’t get to this book sooner, but maybe this was some unexplained destiny at work, since I’m now reviewing for my 9th edition of “Weekly Readings” and all.

Whether or not you believe in that “Ye Olde Kitten’s Tale” about nine lives, this a book anyone who’s ever felt on the outside. (Which is most of us if we’re honest, and yes, even you extroverts know what I mean) Anyway…

Mr. Tiger may look dapper on the outside, but he feels drabber than drab within. Why?

His life’s too neat, far too proper, and is more than a little tired of tea parties.

While this way of life is nice and peaceful, it’s also getting dull and stuffy for our dapper hero (not to be confused with another tea-sipping tiger)- 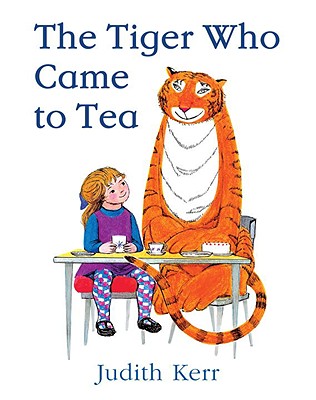 I know I often lament the minimalist era picture books are in right now (this might be more common in non-illustrator writers like me), but it’s a real treat here because it’s in these pages without narrative text (or dialogue in the form of comic speech bubbles) where we see the evolution from discontented tiger to WILDCAT ON THE RUN!

Author-Illustrator Peter Brown is known for being a sort of literary MacGyver-Fashionista in the picture book world, he often varies his illustration styles from book to book, watercolors for one, digital 2.5 D cutouts for another.

The white minimalist background in many of the page spreads really make the vibrantly colorful characters pop out at you, in particular, due to his emerging sense of freedom the more wild he gets. Until eventually-

The illustrations feel modern yet tastefully retro at the same time. It reminds me a little of the art style author-illustrator Dan Yaccarino  used as the model for the “Oswald” television series Nickelodeon did (under it’s “Nick Jr.” imprint), and also reminds me of the slick charm and wit of Gus Gordon’s “Herman and Rosie”

We often associate being a rebel with being an outlaw, or at best someone with few or NO moral grounding, at all.

But a “rebel” is simply someone who is against what the common wisdom is.

Sometimes the common wisdom is not wise for everyone.

After all, the greatest minds of the past and present were rebels in one form or another, and authors (and their characters) have ALWAYS reveled in various forms at one time or another.

Mr. Tiger’s a rebel, if only because he’s honoring a part of himself that’s been stifled far too long, and without getting all “Aesop’s Fables” on you, let’s just say the world could use more: WILD TIME!

For others, it’s enjoying an occasional doughnut without shaming yourself and still working at eating healthier than you once did.

Still, for others, it’s about taking a break from raised pinkies, tea, and wearing pants…

For me, it’s having the courage and self-compassion to walk in my truth, to openly live and love my passions, one of which is sharing with you, my precious readers. I’ve ready many great books in 2014, but  this is among the best.

While his latest release “My Teacher is A Monster (No, I Am Not)” will only increase in popularity as we enter the 2014-2015 school year in the U.S. (and YES, T.A.A. will review this book soon), for this lit. rat, “Mr. Tiger Goes Wild” will always be one of my favorites, because this was the book that hooked me into the world of Peter Brown, and is a tangible testament to what T.A.A.’s all about-

Being Free to be You NO MATTER WHAT!

You may have got snubbed by the Caldecott committee, Mr. Tiger, but I’m proud to give you our “Blue Ribbon”- 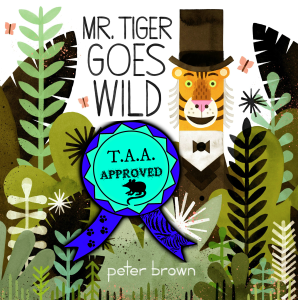 Now we go from rebel tiger to a swashbuckler tabby- 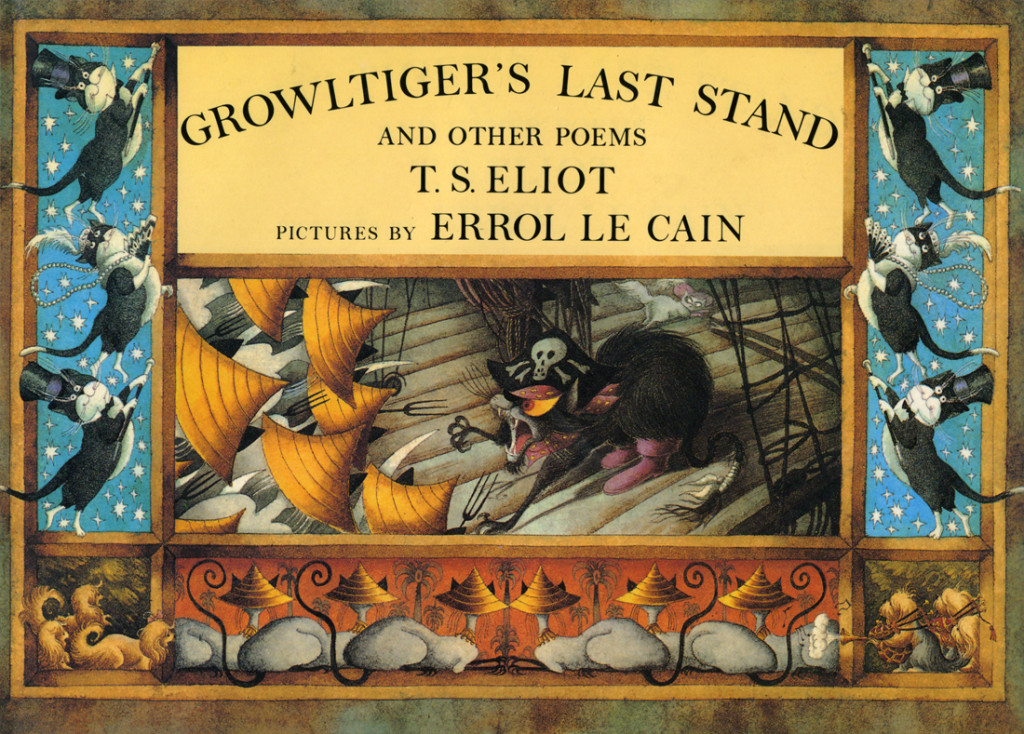 GROWLTIGER’S LAST STAND (And Other Poems)

While most people know poet T.S. Elliot from often on many a high school or college student’s “Required Reading” lists, he apparently tried his hand at Kid-lit with this illustrated collection of a stories in verse and selected poems from which he wrote initially for his godchildren, various poems and stories in verse about cats.

Thankfully, these delightful yarns were made available to everyone in this illuminated gem of a book.

The title story, featured on the cover about a surly feline pirate who laughs in the face of the “Cats and Water Don’t Mix” truism is my personal favorite.   Those of you pet parents with cats in particular will find this book charming, but

While I’ve never had a kitty of my own, (unabashed dog loving rat, that I am), I do have many friends of the feline persuasion, and I’ve asked two of them to read the book and share their thoughts-

“This chap knew cats, and if he never lived with one, you wouldn’t know it reading this book!”

Finally, this a caveat I must bring up, this particular edition is out of print, but I do recommend hunting it down, or ask your library if they’ve got a copy.

Just be sure you have the search for illustrator “Errol Le Cain” as he illustrates this selection of Elliot’s verse and prose with such elegance and whimsy.

If all else fails, you can check out this edition of “Old Possum’s Book of Practical Cats” (Different illustrator, Edward Gorey, but all the stories included in our highlighted edition above, plus MORE!)– 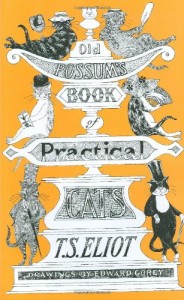 Last, but far from least, a classic review from our review archives-

NOTE FROM THE LITERARY RAT: This is a revised re-post of our original review for “Carousel Cat”

This is a cat story even a devout dog-lover like me (I’ve grown to like cats, too!) can enjoy.

Animals don’t talk here, but a fine story of how animals help us carry on in hard times.

I know one of the needs of some agents and editors are books about families struggling financially.

There’s organic hints of that in the story that can be great talking points for parents and teachers to use for the pre/emergent readers up to second grade.

Wonderful illustrations, and it’s bit text heavy by today’s minimalist standards, but every word counts, in my opinion.

Sweet art and a brilliant love letter to Jersey Shore, YEARS before the recent damage of Hurricane Sandy.

NOTE FROM THE LITERARY RAT: If my ramblings convinced you to buy one or more of the books mentioned above, please support T.A.A. and also your local independent bookstores by clicking the affiliate cover images above or the links within the review(s).

Support us and your local bookstores in one go!