While this edition of “Weekly Readings” is in honor of Halloween, it’s less about the vamps, witches and werewolves, and more about the dressing up-

There’s a Wolf at the Door

Hey, I said there weren’t stories about WEREwolves, not wolves period…

As the subtitle implies, this book is a retelling of five classic fairy tales from the Grimm’s school of thought, but what makes this different is that titular lupine dressed to the nines is the through-line connecting these five (usually stand alone) stories.

whereas most fairy retellings (including your lit. rat’s e-publication “Crocodile Flint“) the wolf of “3 Little Pigs” fame is not necessarily be the SAME wolf from “Little Red Riding Hood” or the lesser known “Goslings” story.

In this book, one wolf does it all,  with some expected results, brought about in a new humorous bent.

Well, for the reader, anyway…

As you might guess from the cover credits, like the Grimm bros. original tales, this book’s a family affair between author Zoё B. and illustrator R.W. Alley, who’s illustrated the iconic Paddington Bear (soon to be a motion picture later in 2014) and countless other books, including one of my favorite finds of the year, “Ballerino Nate” (written by Kimberly Brubaker Bradley) that I reviewed a ways back.

The comic panel presentation is not a mere gimmick, but a clever and fun twist to the Grimm’s stories, and occasionally a subtle “4th wall breaking” snip of wit from our dapper anti-hero addressing the reader directly, a plot technique which sometimes puts me off as a reader but it works here.

When I first discovered this book years ago (when it first came out in 2008) the wolf’s outfit stayed with me for YEARS until I finally had the chance to get my own copy of the book a few weeks ago.

Like I said in my review of “Big Mean Mike” this book took WAY longer to get crossed off my “To Be Read” list than I intended, but it was so worth the wait, and not only the book itself, This is one of those rare few anti-heroes I’d like to spend time with (and feed him something you can’t hunt for), or at the very least, I want his outfit!

I’m actually looking for pieces to recreate it! So far I’ve only found the ascot and red jacket, I’ll keep you posted on when I finally get it put together. But that’s another story I’ll tell another time…

Check Out Our Fan Book Trailer For

“There’s A Wolf At The Door”

Now from a wolf who’s as hungry as he is dapper, to a dog who simply revels in the fun of dress up- 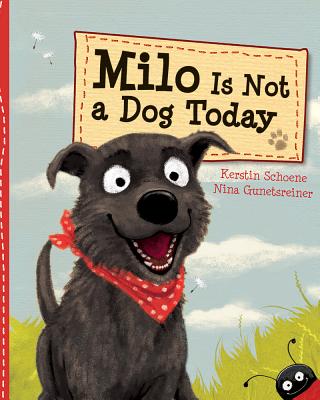 Milo is Not a Dog Today

Unlike the anti-hero  in review above, Milo is the mild-mannered canine sweetie who (unlike most dogs) LOVES to dress up, and he pretends to be everything from a ladybug (or ladybird for you Brits), a , most of his animal acquaintances don’t “get it” and find him more than a bit odd…

Thankfully, Milo happily does his own thing for his own personal amusement, but eventually meets a new friend who also loves to play dress-up, just like him!

That’s all for Weekly Readings,  have a happy and safe Halloween, see you next time!